Recently, the results of the 2020 MCM/ICM were announced. Students of NEU at Qinhuangdao won one “Finalist”, eight “Meritorious Winner” and 33 “Honorable Mention”.

The contest attracted 20,954 teams from prestigious colleges and universities around the world, including 103 teams from NEU at Qinhuangdao. During the contest, the modeling team formed by Zou Bofeng, Zhang Shixun and Wang Jinhui, who are the students of 2017 from the School of Resources and Materials of NEU at Qinhuangdao, studied and worked out a solution to open interdisciplinary modeling. Finally, they won the “Finalist” with their work How to Design the More Effective team? 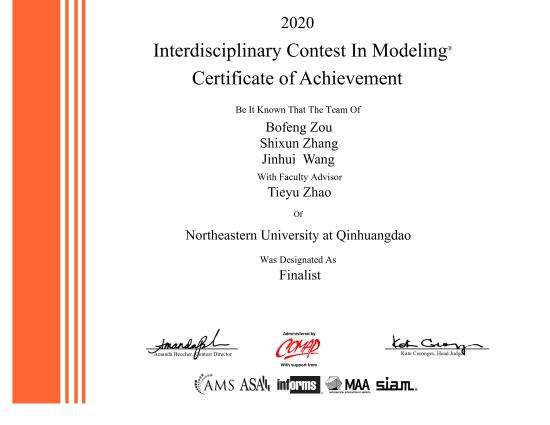 It is known that NEU at Qinhuangdao has been paying great attention to the significance of MCM/ICM to the cultivation of innovative talents in recent years. By setting up three mathematical modeling contest training courses such as Mathematical Modeling Contest Training, organizing intensive training classes in winter and summer vacations and conducting intramural selection and competition, NEU at Qinhuangdao has made effort to provide special training covering basic knowledge extension, skill practice and drills for the students. The students' academic level, unity, cooperation and innovation ability have been effectively enhanced. In the face of the COVID-19 epidemic, the Mathematical Modeling Guidance Team of the School of Mathematics and Statistics of NEU at Qinhuangdao worked together to guide students to actively prepare for the contest and made positive contributions to the excellent results the students achieved in the contest.