On November 14th, the National Remote Sensing Center of China, Ministry of Science and Technology released a notice on approving “Square Kilometre Array” (SKA) research as a national key R&D project for 2022. “Sky Survey of Neutral Hydrogen and Cosmological Simulation”, a project led by Prof. Zhang Xin from NEU, was approved with NEU as the project initiator and undertaker and Prof. Zhang Xin as the project leader. Other participants of the project include the National Astronomical Observatories, Chinese Academy of Sciences (NAOC), Sun Yat-sen University, Beijing Normal University, Xinjiang Astronomical Observatory, CAS, and Xidian University. The total project funding is RMB 9 million.

“Sky Survey of Neutral Hydrogen and Cosmological Simulation”, a project led by Prof. Zhang Xin, is launched in order to numerically simulate the large-scale structure of neutral hydrogen in SKA cosmological studies; study the distribution and evolution of neutral hydrogen including its statistical properties and correlation with observations of other bands; develop methods for observing neutral hydrogen in dark matter, dark energy, modified gravity, cosmic expansion or other cosmogenic models, as well as new means, such as deep learning, for detecting and distinguishing cosmographical models and for accurately measuring cosmographical parameters; conduct a scientific numerical simulation of SKA cosmology based on important scientific problems concerning galaxies and intergalactic media, including the formation process of galactic disks, the turbulent flow of intergalactic media, net-like structures in the universe, exchange of substances between galaxies and intergalactic media as well as feedback, etc.

It is learned that SKA is a large-scale international science project, which is the world’s largest synthesis radio telescope built and operated by many countries in the world. With a collecting area of up to one square kilometer, it provides a significant opportunity for human cognition of the universe. SKA research is carried out in order to reveal the formation process of first-generation celestial objects, the formation and evolution of galaxies, the nature of dark energy, cosmic magnetic fields, the essence of gravity, molecules of life, and extraterrestrial civilization. Its revolutionary design, which also indicates an unimaginably large amount of information and data, overthrows the traditional means of research on radio astronomy, bringing into being a brand-new idea of innovative research on radio astronomy. 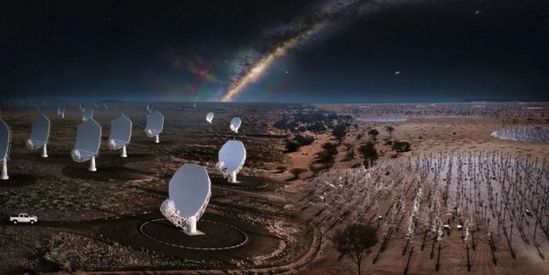 SKA is the largest radio telescope ever, and a supranational large-scale scientific facility that helps to achieve major scientific discoveries and breakthroughs. SKA will exert a profound influence on the development of astronomy and fundamental physics in the next 50 years.